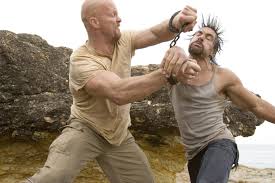 Before PUBG or Fornite, or even before the battle royale concept before it got famous. This movie is about ten people fighting to the death broadcasted around the world, who are all condemned killers from all corners of the world. The reward for the sole survivor is their freedom. With a budget of $3 million, the movie made $8.6 million at the box office. This movie stars Stone Cold Steve Austin and Vinnie Jones.

Steve Austin was originally offered the part Vinnie Jones plays. But after WWE decided to make the movie in their WWE Films department, they gave Steve Austin the lead role. Steve and Vinnie used to play jokes on each other at the filming locations such as Steve putting inflatable sex dolls in Vinnie’s trailer and also putting up 50 signed autograph pictures of himself all around his trailer. And referred to each other as 1# and 2# by how they were billed in the film.

Receiving average reviews by critics and reviewers, I remember this movie fondly. This movie was rated higher than its sequel with the WWE professional wrestler, Randy Ortan though. While this movie has typical action elements used, the fight choreography is top-notch. The ending is the ultimate revenge. I recommend this movie to fans of the WWE and people who watched the trailer and are interested in the concept.

Ian Breckel: Well, where are you from back in the states then, huh? Jack Conrad: Alaska Ian Breckel: Alasks. Whereabouts? Jack Conrad: About 80 miles north of Anchorage. Little fishing town. You probably heard of it. It’s called Fuck Your Mama.

2 thoughts on “The Condemned, a movie review”