Wrestling finishers are moves usually to end a professional wrestling match and a part of the wrestlers individual trademarks. To be a professional wrestler you need at least one finishing wrestling move. These are some of the best of the best and favourites of mine out of the performing arts genre. This list is in no particular order it is near impossible to do other wise.

Woooooooooooooooooooo! The nature boy makes the list by using one of the most classic wrestling submissions in history. It is perfected with his daughter Charlotte Flair with it being called the figure eight leg lock.

With some height, this wrestling move hits their opponents with big impact.

One of the most dangerous moves to do that could actually break someones neck. And it has with some people.

The Heartbreak kid was the first person to use the superkick well. Now everybody wants to be Shawn Michaels and the finisher has been reduced to a signature move. RVD and Eddie has made the frog splash famous and now everyone uses it. Looks way cooler than a normal splash. I miss Eddie and Rob Van Dan.

A beautiful move from the top rope. The forward back flip was made famous by Billy kidman and many others. 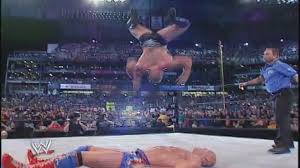 One of the simplest moves that looks very impressive. Made famous by Stone Cold Steve Austin it is one of the most recognisable wrestling finishers in the world. If I was in a real fight and saw the opportunity to do it, I would.

Speaking of one of the most recognizable finishers in the world, It is now known as the RKO. I would do this wrestling move if I had to attack someone from out of no where.

The flip pile driver is an impressive move to see and pull off. Flipping over a wrestler as the other person does a backflip landing on their head. Check it out in the video above. When I use to do backyard wrestling I took this move.

The classic piledriver used as finishers by The Undertaker and Kane. Many other wrestlers use this move because it is that good. Never dissapoints me.

What do you think of my list? I hope I have not missed any that are good. I think I said I would make this list and I did. Next time I might do a Top 10 Tag Team Wrestling Moves.