Just like another speck of dust that’s on the highway of life,
He Screams at anyone who’ll listen that the end is in sight,
So then he circles the wagons or he just circles then quits
Cause the Highway could become the final battling pit
So when the company wants, Another problem resolved,
Or if the company wants a choice of nothing at all,
Point your thumb out to the highway through the heat and the dust,
And raise your finger in the middle till you shout: – What About Us? Ministry

New band, new songs, and new album I have never heard before. The American band from Chicago, Illinois has been around since the early eighties. With many of their albums being released under many different labels this greatest fits album went on the Warner Bros. Records label this time. Over the years they have played at big events such as Lollapalooza 1992, Big Day Out 1995 and much more important tours. This album was highly regarded by most musical credits.

The band’s lineup has gone through many changes throughout its history. Under this paragraph is an image of all members, what they did on each album and what year. As you can see one name is the longest. Al Jourgensen is the lead vocals but much more. He also was a part of writing all the songs on this album except the Black sabbath cover. And then he plays the guitar (slide, lead), organ, mandolin. Also he was a key part of the production by being a programmer and engineer. 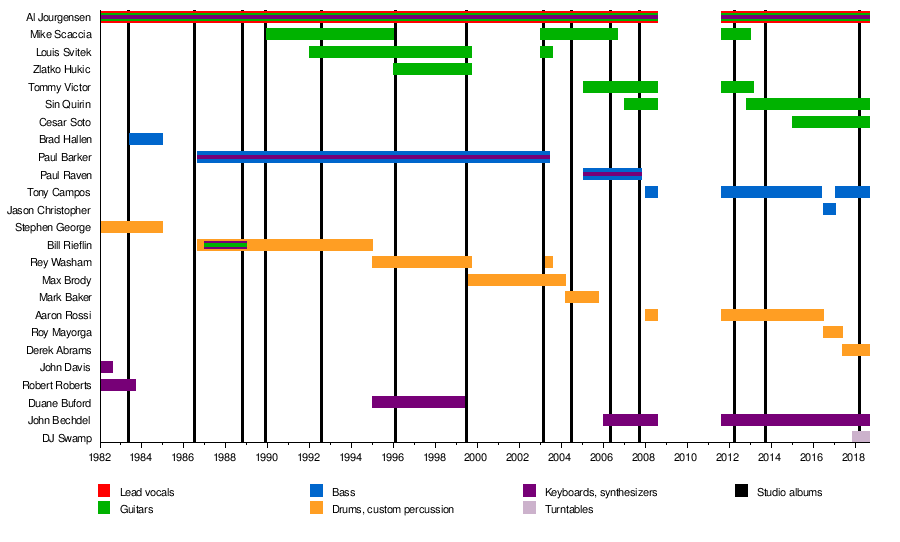 Tracklist for this greatest hits album:

Better than I was expecting and makes me want to listen to their newer albums made after 2001. This band truly has their own original sound. An industrial sound with crazy fast pace rhythms and riffs. Solid amount of great songs are on this album and can see that their style has influenced other bands in their style. My friend gave me a list of bands to listen to and this was one of them. So far he has gotten me into two new bands and potentially even more. I could list to this album again. Deffinely gonna remember a few songs off it. I recommend this album to all fans of Nine Inch Nails or Industrial and electronic alternative rock/metal style and sound.