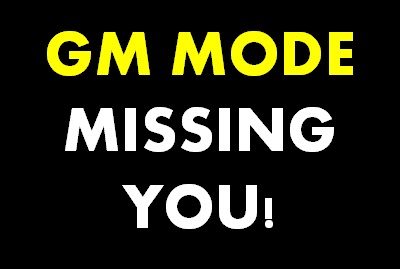 What is GM mode? It is a mode in some of the old WWE SmackDown vs Raw video games. In this mode you get to book your own professional wrestling shows and simulate matches with wrestlers. You compete against other wrestling shows for ratings, money and wrestlers. This mode is greatly missed by wrestling fans as GM mode has been combined into Universal mode in the new WWE video games. If they were to bring back the original GM mode from SD vs Raw video games I would buy their most recent game to play.

SmackDown vs Raw 2006 GM mode was introduced. In the game you are the general managers of what ever show you choose. In 2008 you had three choices to pick from. After choosing a brand you start your season being doing the WWE draft. Playing against AI or friend you each choose one wrestler at a time and pay money to get them on a contract. After that the fun begins when you start making your first show. The GM mode was discontinued in WWE SmackDown vs. RAW 2009. Actually when the quality of WWE video games when down.

Each show costs money as well as gimmick matches and extra options. But you normally make some profit anyway. Then you can advertise to make large amounts of money. Making your show good is even more complex. You need to set up rivalries against wrestlers, set your wrestlers in appropriate matches so they do not get hurt, make good matches to get good individual match ratings that affect overall ratings after each show. It takes a little to learn but once you know it starts to get fun. When you simulate a show you and a friend can play any match on both shows.

Then there is even more things you can do as you make shows through your calendar. Pay Per Views are at the end of the match and they are for your biggest shows. At the end of everything a winner will be crowned the GM of the year. If you can last that long without going bankrupt or losing all your wrestlers over injury or better deals from the completion. You can also use the free agency button to hire new wrestlers including past legends in the new game modes of GM mode.

Modern professional wrestlers Xavier Woods and Tyler Breeze from the WWE are currently doing a season mode on the YouTube channel UpUpDownDown. This series of videos has motivated me to write this article. They add extra rules to the game to make it more fun. You can watch it here https://www.youtube.com/watch?v=BK_uJ9OWflU&t=3s   Xavier Woods also GM mode tweeted Ok so do people actually want #GmMode in the next wwe 2k game or am I biased? (Y’all know I know nothing, this is honestly just for my curiosity) A poll attached had 90% want GM mode with over 9000 votes.

I wish there was an alterative wrestling video game out there that was as good as this mode. This article will not appeal to everyone and that is ok. But to people who want what I want will have to agree with me. The internet wants it too. You just have to type GM mode into a search engine and you will find articles and fan concepts of it. This mode is a great side video game for fans of wrestling and simulation video games. If only I got that PS2 emulator working…