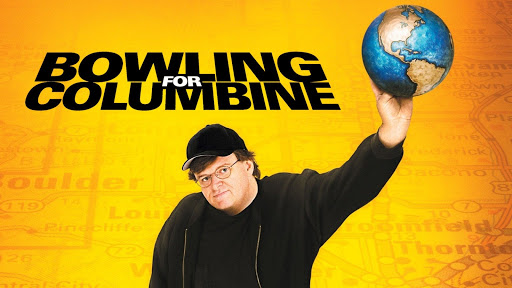 Michael Moore: If you were to talk directly to the kids at Columbine or the people in that community, what would you say to them if they were here right now?

Marilyn Manson: I wouldn’t say a single word to them. I would listen to what they have to say, and that’s what no one did.

A strong combination of humour and tragedy. Filmmaker Michael Moore explores the roots of America’s predilection for gun violence. This documentary is more relevant than ever in America. One of the most popular documentaries from Micheal Moore. This was the highest-grossing documentary until 2004 when Fahrenheit 9/11 made more in its opening weekend than this movie did in its entire run. With a budget of $4 million it made $58 million at the box office, The first rough cut of the film ran about six hours.

With his satirical, investigative approach, Michael Moore takes the serious issue of violence and explores it from every angle. Why is America obsessed with guns? And why is its death toll from guns the highest in the world? Some say guns only mostly kill criminals and it limits non-fire arm assaults. Then others say it is too easy for just anyone to get a gun. This documentary was made in 2002 and you hear similar stories from the documentary in modern times.

In May 2002 this film became the first documentary to compete in the Cannes Film Festival’s main competition in 46 years. The film received a standing ovation that lasted 13 minutes. Because the film didn’t fit neatly into any established categories at Cannes, the Jury created a special 55th Anniversary Award just for the film. When the movie won the Academy Award for Best Documentary Feature at The 75th Annual Academy Awards in 2003, Michael Moore created a controversy by denouncing the George W. Bush administration on stage.

The concept that started the creation of the documentary came from the Columbine High School massacre, when 12 students and one teacher were shot to death in Littleton, Colorado. Using real life footage and audio, the scene in the documentary is probably the most darkest. Two students went bowling before school and injured/killed many people. That is how they got the tittle of the documentary. Then Moore does more relevant interviews about the topic with Matt Stone, Marlyin Manson and many more.

Now I know Micheal Moore recently has done more questionable things recently, this is still a good documentary that keeps you interested. Bringing up the hard questions in 2002, you should make up your own mind about this documentary. It forces you to think about heaps of subjective topics and some that I would say are true. Overall it is probably one of the most memorable political documentaries of all time. I recommend this documentary to people who have their own thoughts about guns and what America deals with having their gun laws.