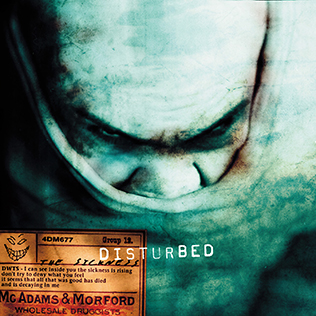 The debut album by American heavy metal band Disturbed. At a time when I was younger I guess I can say that Disturbed was my favourite band. One of the first albums I owned and the first headline band I saw live. A song from the album called Down with the Sickness quickly became the band’s best known song and is a concert staple. This album sold 4,248,000 million copies in America, making it the band’s most successful album.

Songs from the album, The Sickness has appeared in other media. Voices appeared in the trailer for the horror film, Jeepers Creepers. 3 songs were in two Dragon Ball Z movies. Video games such as Rock Band 2, WWE 2K18. On the tv show like South Park and much more movies and various media.

In 2010 the album was remastered and remixed. Dan Donegan commented on it saying “[…] it’s the album that put us on the map and launched our career. So we went back into the studio and we remixed it, we’re having it remastered, we’re gonna put a couple of bonus tracks on there and touch up some of the packaging and the artwork. Just a little collector’s item, a little tribute to that album for the fans”.

In this album the band immediately found there sound. They found there combination of compositional skills and vocals from David Drainman. Listening back to all the songs of the album, there are few good songs on it then I remember. Only 5 songs stand out from the rest on this album that I recommend on the list above. I reccomend Disturbed’s The Sickness to people who like early nu-metal style of music.

One thought on “The Sickness, an album review”