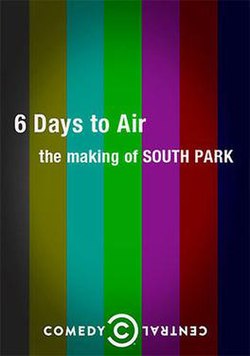 “There are almost as many laughs in [the documentary] as there are in an actual episode of South Park.” – Neil Genzlinger of The New York Times

A look at the making of a South Park episode, HUMANCENTiPAD. The American adult animated television series is different compared to The Simpsons or Family Guy. While they take months to produce their animation, South Park takes only six days to make their show all in one building.  The South Park production process is interesting and the 22 minute episode HUMANCENTiPAD is complete just hours before its original air date.

Crudeness, vulgarity, and very controversial topics. The process they go through in one week is fascinating. They write in one week because without a deadline Trey Parker and the other writers start to second guess what they have come up with. First they come up with the overall original concepts with the writers and then the departments of animation start designing what the show looks like.

The film released on October 9, 2011 on Comedy Central, and received positive reviews from critics. Ramsey Isler of IGN wrote that “the greatest success of this documentary is that it gives a personal look inside the bizarre professional lives of two of the entertainment industry’s most successful creatives,”. The documentary was nominated for an Emmy Award in the Outstanding Nonfiction Special category.

Returning from The Book of Mormon this episode is the first one for an entire season. Parker and Stone, alongside producers Anne Garefino, Vernon Chatman, Bill Hader, and Susan Arneson, toss out ideas for the episode. Aspects of production is shown, including voice acting, animation, lip sync, communication with standards and practices, character design, and editing. By the next Tuesday, one day before airing, the staff is preparing for their ritual all-nighter,

The documentary show dedicated people doing the work to create the consistent quality of the animated tv series of South Park. They seem like they have a lot of fun creating it. Then things get hectic for them. What we get is very good, and a long overdue project. There is so much more to these creators than we see on this special. Nontheless, I recommend this documentary to any fan of South Park and animators on the show.